To learn about Japan’s flood management while visiting interesting spots in the Kanto area.

Please apply through the online Registration Site. We will accept tour applications on a first-come, first-served basis, depending on the capacities of the destinations. Please understand that we may stop receiving them before the official deadline.Number of Participants Accept the first 60 applicants.

It is not possible to purchase lunch during the tour, so if you cannot prepare your lunch before the departure, it is recommended to register a lunch box.

Start from here for the Field Trip

2. Dyke break of the Kinu River due to the Kanto and Tohoku heavy rain in September 2015

Around 12:50 on September 10, 2015, the dyke of the Kinu River broke about 200 meters wide at the Misaka district of Joso City, Ibaraki prefecture, which resulted in an inundation of about 40 km2, equivalent to 1/3 of the Joso City area, and the rescue of 4,300 people who failed to evacuate in time. This flood disaster caused tremendous damage: over 1,700 houses were completely or partially destroyed, more than 3,500 houses were inundated, and two people were killed. MLIT started emergency restoration works around 22:00 on the same day, about nine hours after the dyke breach, and completed it two weeks later on September 24. 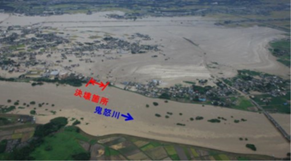 The Metropolitan Area Outer Underground Discharge Channel, one of the world's largest underground channels, takes in floodwaters from small to mid-size rivers in flood-prone low-lying  areas and directs them to the Edogawa River through a 6.3 km tunnel running 50m underground. The construction started in March 1993 by utilizing Japan’s world-class civil-engineering technologies and continued for 13 years till June 2006, when the channel was finally in service, directing floodwaters from the Oootoshifurutone River to the Edogawa River. 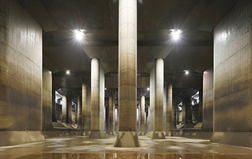 The Watarase River flows into the Tone River in Koga City, Ibaraki prefecture, as Tone’s biggest tributary, which is 107.6 km long with a catchment area of 2,602 km2. Watarase Yusuichi, located in the lower Watarase River, is the largest retarding basin in Japan, with an area of 33 km2 and a total storage capacity of 200 million m3.

Over the years, the retarding basin has undergone a series of construction to increase its flood control capacity. The improvement contributed to reducing flood damage downstream by storing a massive volume of floodwaters during a heavy rain event in October 2019, when Typhoon Hagibis hit Japan.Watarase Yusuichi also nurtures a large wetland with a rich and diverse environment. For this reason, it was designated as a Ramsar site in July 2012. 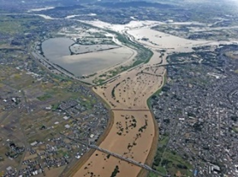 NIED is the only one national research institute with a focus on disaster risk reduction established in 1963, NIED targets all kinds of natural hazards: heavy rain, snowstorm, flood, landslide as well as geophysical hazards covering all phases of disaster management. Science and technology for disaster resilience has been promoted with various stakeholders, leveraging the cutting-edge facilities and equipment.

This rainfall experimental facility has one of the largest surface areas for sprinkling water in the world. The facility can control rain from misty rain to torrential rain of 300 mm per hour in 10-minute increments, and are widely utilized by both government organizations and private companies for research on landslides and flooding, as well as for verification experiments using drones and automated driving technologies.